Restorative art, an art that does good

Drawing, painting, sculpture, photography, engraving: all the works available for sale on the e-gallery

Every Thursday, the gallery offers you the opportunity to discover a work of art chosen from among the artists represented on the site.
It’s Art Thursday, an exhibition at your fingertips, to better discover a creation.
For this second virtual exhibition “Restorative art, an art that does good”, I chose works that make us think about the salutary aspect of the creative gesture.
Selected artists :
Yann Bagot
Philippe du Crest
Michaël Cailloux
Colette Grandgérard
Atsuko Ishii
Anne Laval
Véronique Pineau
Maryline Pomian
Coco Téxèdre
Isabelle Tournoud

How does art enter our daily lives?
From one exhibition to another, at the bend in the street, by owning works of art, by opening a book, or during a coffee break in an arty cup…

But how does our body let itself go to curiosity, to the desire to discover, to the point of contemplation – a work of art, which by making us forget our everyday life, gives us a pleasure, even an unsuspected well-being?
Several experiments have been carried out in various institutions, such as the MBAM in Montreal, Canada(1) , which welcomes visitors on their doctor’s orders (“museotherapy”). In an article in french scientific revue Sciences et Avenir, we also learn that researchers in neuroscience and neuroesthetics have proved that viewing works of art through the retina can cause a release of dopamine!
Since 2014, the Musée du Louvre(2) has been offering visits, meetings and workshops with nursing staff and with patients for an exchange with the hospital world through partnerships and meetings (recently: “Le musée, ça fait du bien”, round table with the philosopher and psychoanalyst Cynthia Fleury).
The artist Gérard Garouste celebrated the 30th anniversary of La Source(3) , an association that helps children in difficulty with the conviction that artistic creation can prevent exclusion.
Other examples could be cited or come to mind, such as the exhibition “L’âme au corps “(4) , which was remarkable for the quality of its proposal, as I was dazzled by the richness of the discourse and what was shown over two centuries (1793-1993), in the relationship between the artist, science and progress.

After the last few months, when we were deprived of a direct relationship with the work, we were able to realise the lack of it.
For the artists, who are obliged to keep their creations in the studio, as well as for us.

Seeing a work of art can thus protect us, repair us, as does the art of Kintsugi. This ancestral technique, discovered at the end of the 15th century in Japan, consists of repairing a broken object by highlighting its cracks with a repair of lacquer sprinkled with gold, instead of masking them.

Without talking about art therapy, we can nevertheless evoke, both on the artist’s side and on the side of the person receiving the work, a singular exchange that certainly makes us better able to cope with our condition and that of the world.

(1) “Aller au Musée pour se soigner”, Sciences et Avenir, N°872 – October 2019,
(2) Partnerships with the AP-HP (since 2014) and with the ARS Île-de-France (since 2019). In 2020, the Louvre Museum strengthened its action in favour of mental health by signing a new partnership with the Paris Psychiatry and Neurosciences GHU.
(3) https://www.associationlasource.fr/
(4) “L’âme au corps”, Grand Palais, Paris, 1993
https://www.franceculture.fr/oeuvre/lame-au-corps-arts-et-sciences-1793-1993-exposition-galeries-nationales-du-grand-palais-paris-19 Translated with www.DeepL.com/Translator (free version) 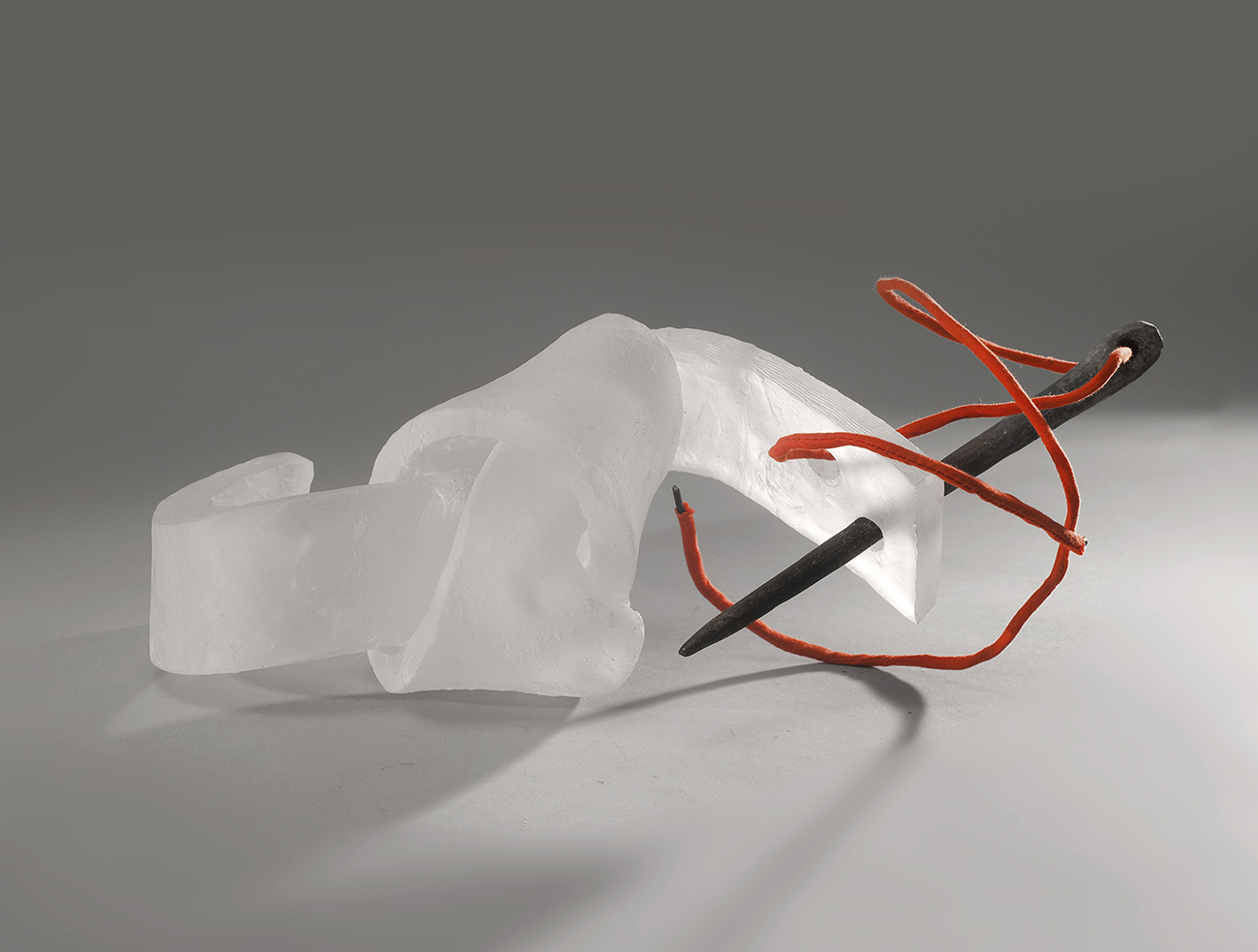 “The needle is immediately associated with the act of sewing and with an ancestral image of women. However, the object is less simple than it seems, its uses are multiple, contrasting, even antagonistic – sewing, binding, stitching, piercing… Moreover, the needle carries a powerful symbolic charge. It is the bearer of stories and participates in the collective imagination of different cultures which are expressed through rituals, tales, songs, word games, etc. The needle thus builds bridges between societies.” 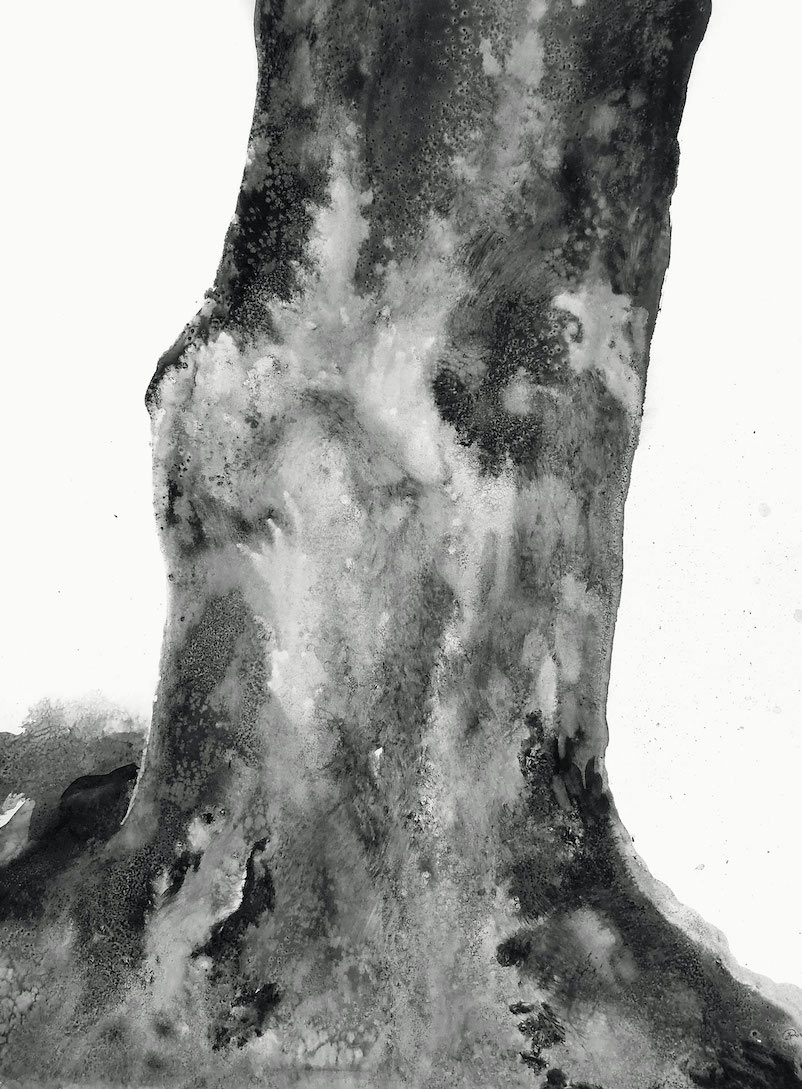 “In residence at the Abri mémoire in Uffholtz in June and July 2020, I painted in immersion in the Hartmannswillerkopf mountain. On this battlefield of the First World War, the forest ravaged by the fighting has now reclaimed its rights.
Amongst the remains of the war, trenches, shelters, shell holes, barbed wire bushes, painting this summer forest in Indian ink plunged me into a double movement: the wounds of History impose memory and recollection; the formidable vital impetus of the forest acts as an energising and optimistic source. To let oneself be crossed by History, to paint the brightness of the present: here, more than elsewhere, I have keenly felt the landscape as a “transformation of lived time into living space”, according to the phrase of François Cheng (The Empty and the Full, 1979). 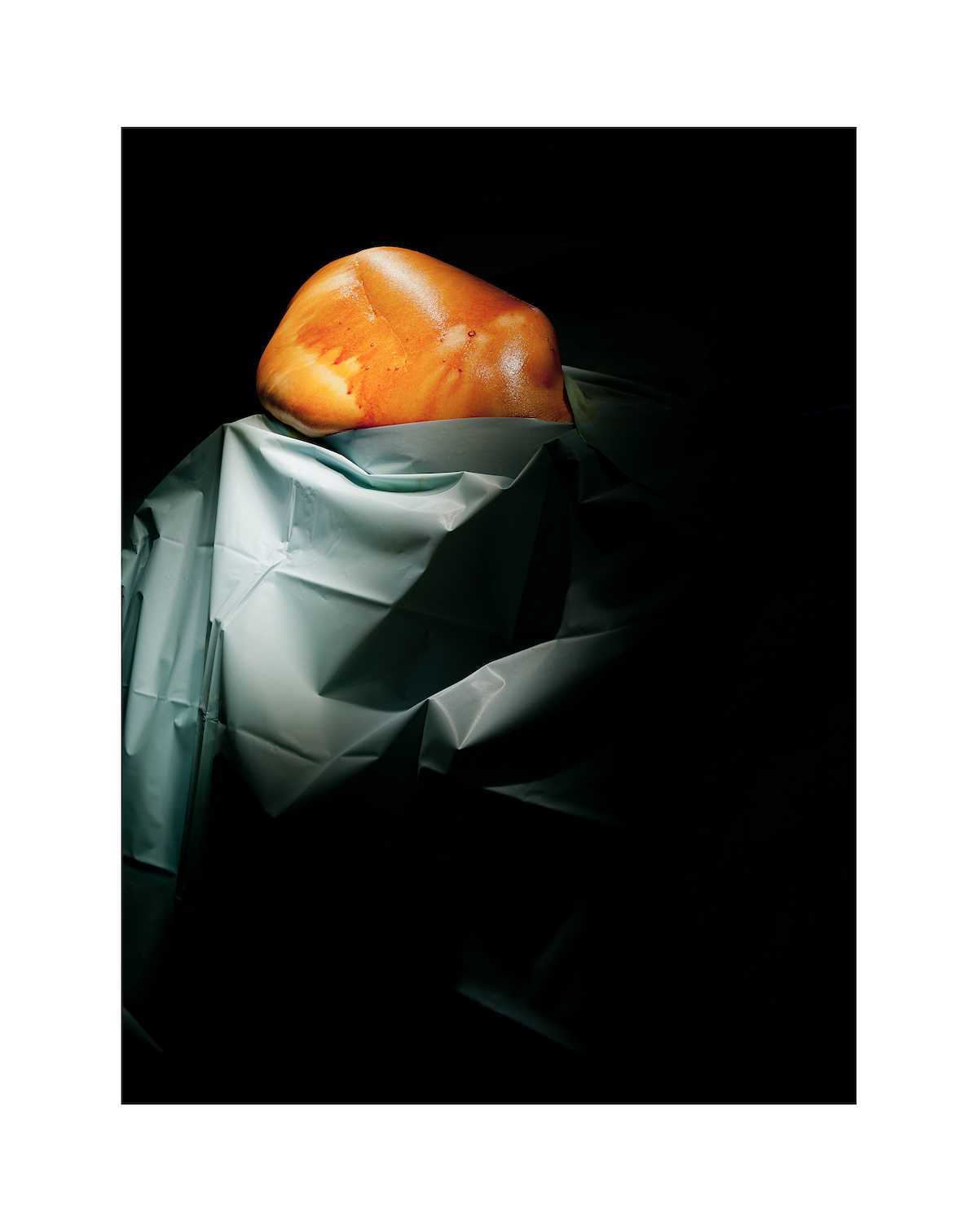 Philippe du Crest, La Cella moderne, 2008-2018, Pigment print mounted on aluminium, edition of 12 copies in all formats, numbered and signed on the back by the photographer

As its name suggests, La Cella Moderne takes us to the very heart of the temple of what today could be the symbol of our relationship with the body.
A relationship that is deviated because today it is in mutation; a hybrid place filled with mystery, inaccessible, secret, and in return the bearer of “normality” – that of the eradication of illness, injury, and even ageing.

There are mats to awaken the senses of the very young, here a mat for adults, like a book that you open, a double page with elements to caress, move, pull on the peg, smooth, rough.
To be touched without moderation, placed on a table or looked at with envy, hung in an American box or hidden in a favourite drawer… 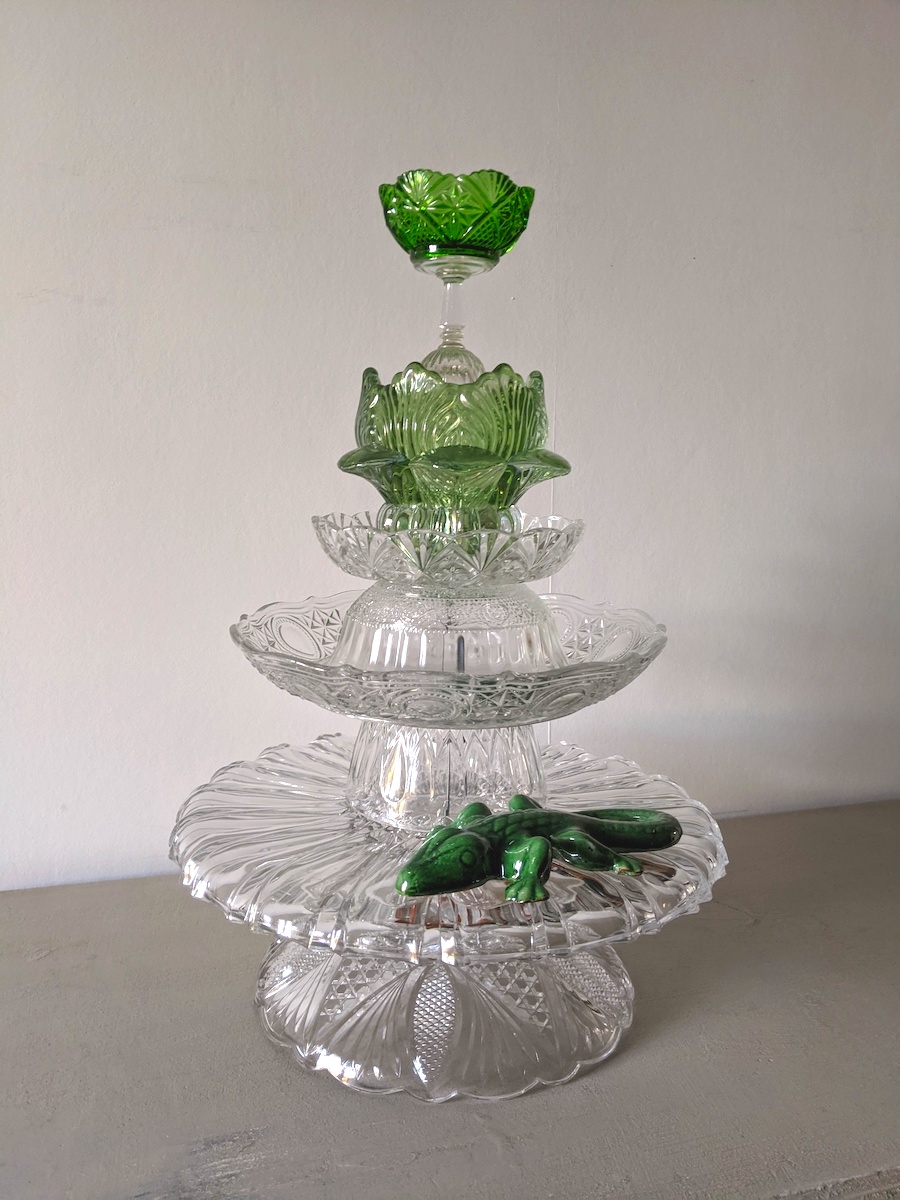 “This is a unique creation made from glass tableware and a ceramic lizard, found at flea markets.
The symbol of the lizard is rebirth, renewal, regeneration.
It has the power to regrow certain parts of its body that have been cut or damaged.
We can imagine that it helps to regenerate damaged people.
In ancient Greece the lizard was associated with the possibility of a second life.
It is for this symbolism that I chose this sculpture”. 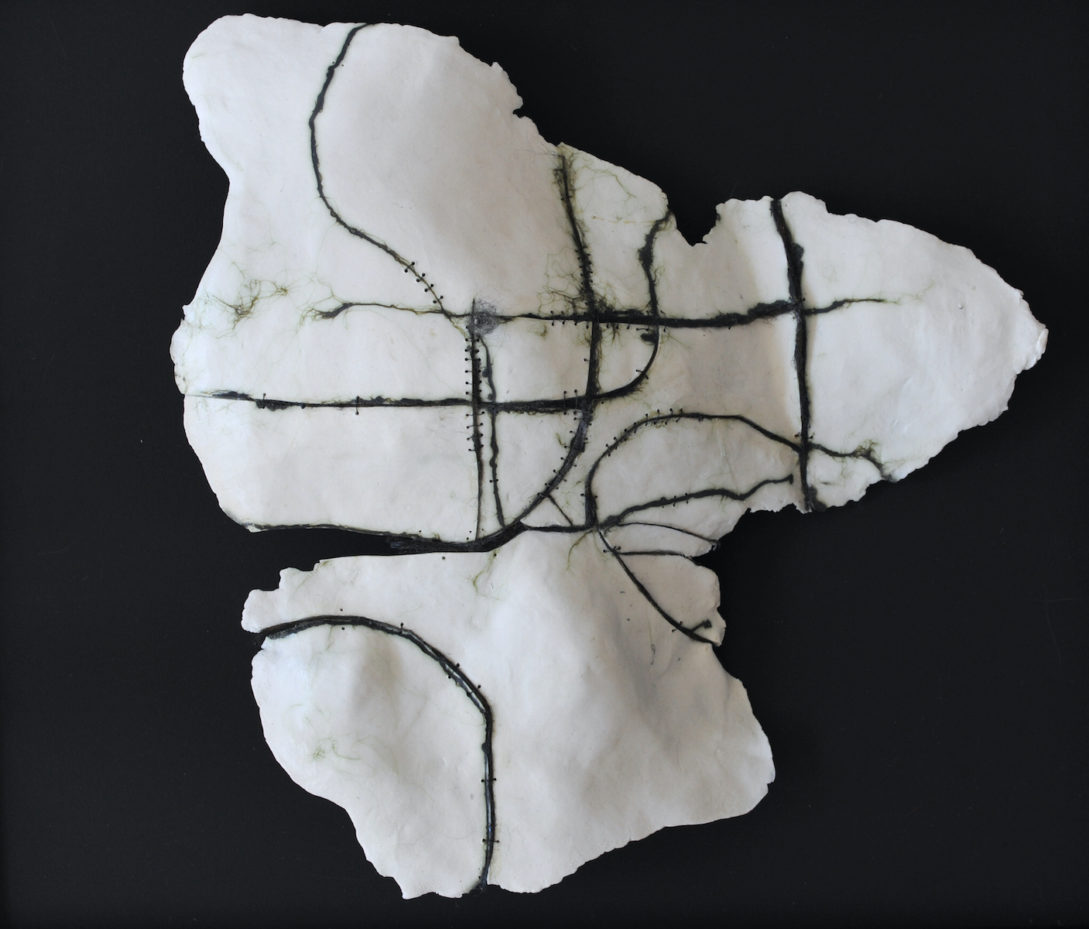 The Fossil Landscapes created in 2016 for a solo exhibition at the Montormel Memorial (Orne) are the result of the artist’s reflection on the history of the World War II memorial and the surrounding landscape. Imbued with past horror, the sculptures taken out of this particular context have such a plastic force that they can also be discovered for the strange beauty they give off. Working with porcelain as an imprint of the hilly landscape that inspired the artist, Anne Laval has fashioned her sculptures like a puzzle: piece by piece, each raw porcelain element is inlaid with copper before firing, creating an evocative greenish oxidation – underlying the translucent material.
After firing, the landscape and its history is then recreated, each piece being sewn together with a steel wire, each stitch requiring the whole sculpture to be turned over. The gesture is therefore primordial, meticulous, with a slow rhythm, rediscovering the work of the little hands of haute couture! 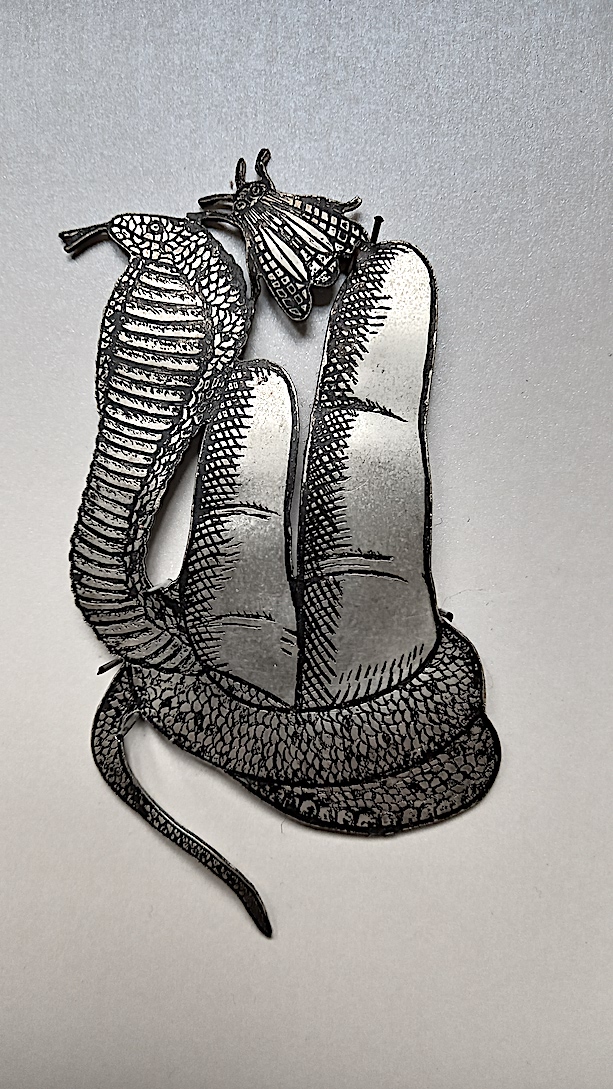 “Victory” or how to overcome that which strikes us, weakens us. To this fragment of body the artist has played with the symbolism of the snake, the caduceus of Asclepius, god of medicine. The fly, Michaël Cailloux’s signature, completes this hopeful composition! 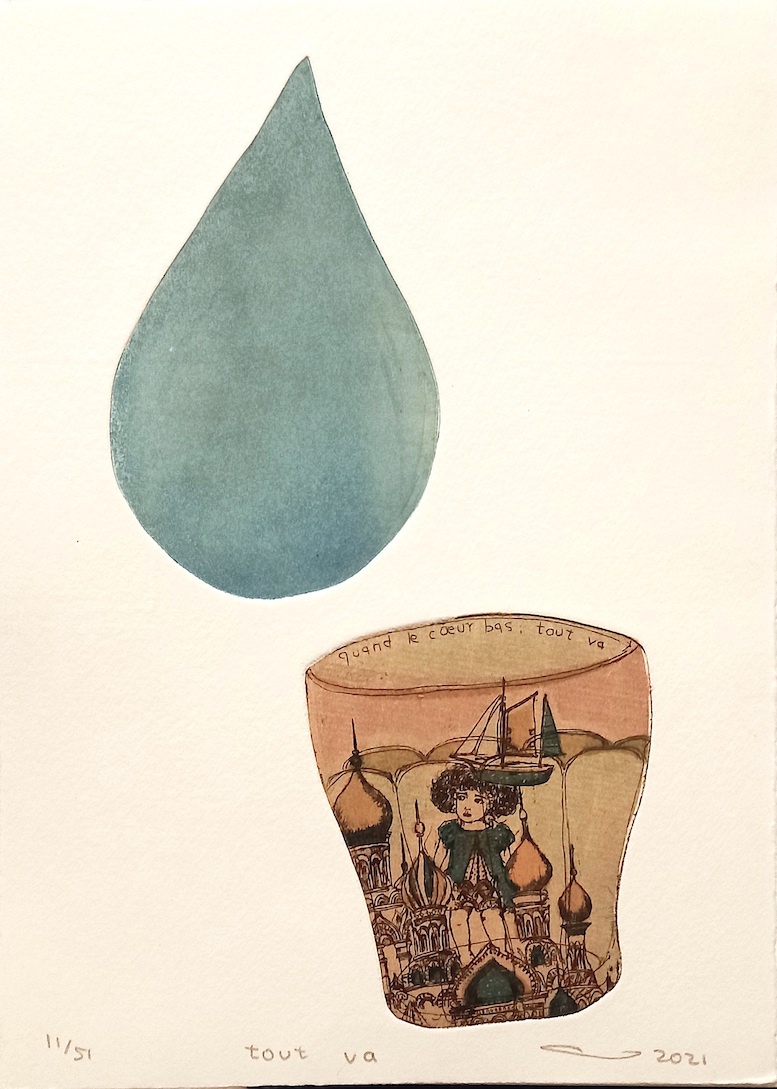 “Tout va”. Because beyond the ills, words repair and comfort. And the artist’s image invites us to lightness. 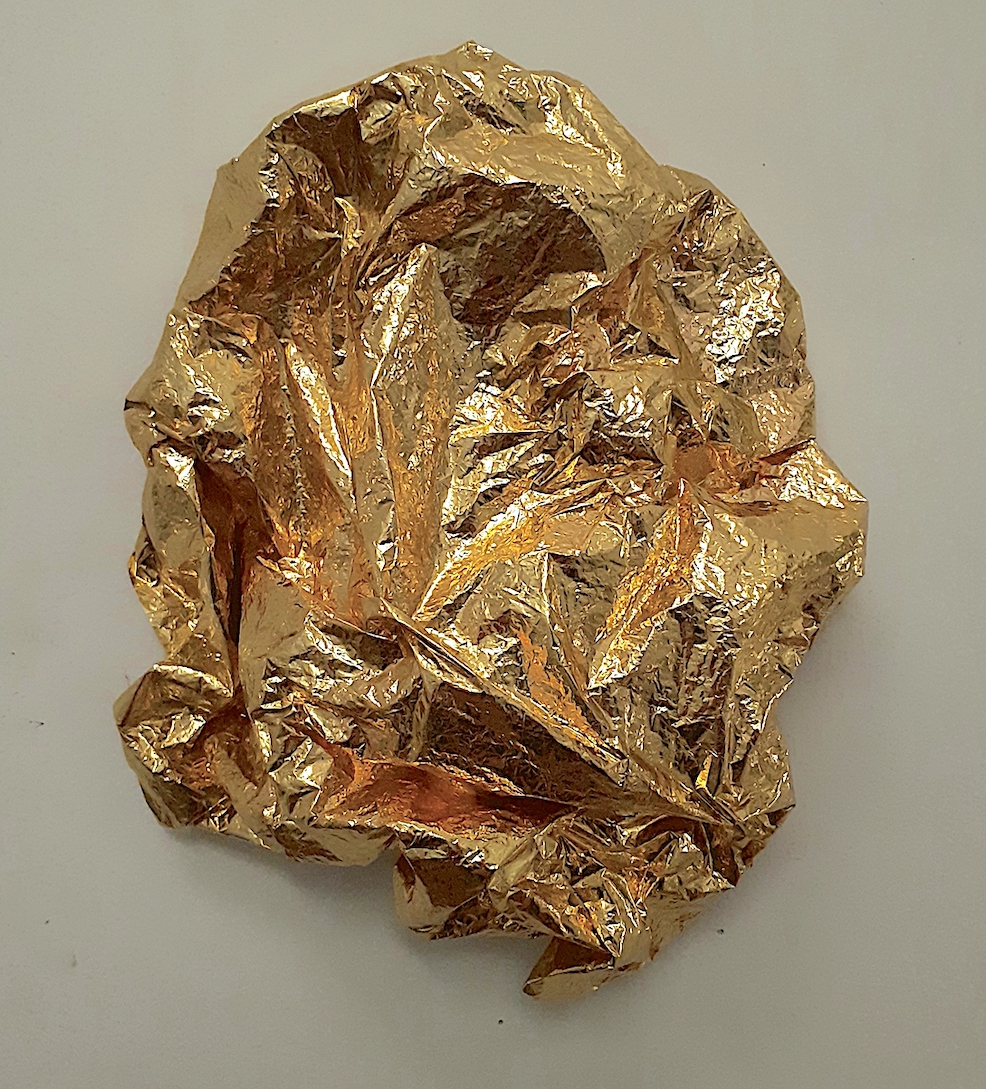 “Survival” protocol: The material chosen inspires protection as it is used in case of an accident for example. As for its colour, if one does not know the use or the scale of the cover, the gold can make one think of a nugget!
But in this particular case of diversion, the artist Maryline Pomian will evoke the symbolic protection by creating a personalized sculpture. The artist will indeed sculpt the cover according to the object that will be hidden inside, protected from the eyes of all, but identifiable in thought by its owner. In this way, she enhances the value of an object in a strong and intimate emotional relationship.
The artist becomes an intercessor, entering into a resonance between the object – what it conveys – and the owner of the work thus created.